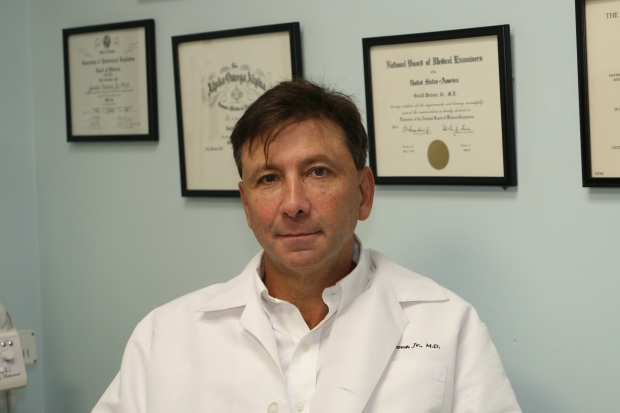 As a young medical student, Dr. Gerald Pierone had ambitions to save the world from infectious disease, imagining himself traveling to Africa to treat patients, developing brand new lifesaving vaccines, and helping eradicate disease.

However, his dreams would come much closer to home, as it was the ‘80s and the HIV/AIDS epidemic had hit New York City with a mighty fist.

“I was very young and idealistic,” he said. “The epidemic, this infectious disease had come to me. So that kind of became my mission.”

Today, he now works in Vero Beach, where he was one of the first doctors treating HIV/AIDS in the Treasure Coast. Also, he brought the world of facial sculpting to battle lipoatrophy, or facial wasting, to patients in the area as well.

His experience with the disease began when he was working at Mt. Sinai in New York, and later an AIDS clinic, where patients were coming in droves. By 1989, more than 100,000 people with the disease had been reported to the Centers for Disease Control and Prevention. However, with his new wife, the couple decided they would eventually want children and felt that raising them in the city was near impossible. So he gave up his ambitions, anticipating becoming a small town doctor, doing his rounds at the hospital for more benign infectious diseases.

However, the disease was again much closer to home than he thought, as the Big Apple was not the only place where HIV was impacting the population. With no one else in the Treasure Coast practicing or specializing in HIV medicine, he became go to doctor.

“I was ready and willing to do it; I became kind of a magnet for people with HIV infection as soon as I got here,” he said. “In those days, there was still a lot of stigma. Word got out and I encouraged it because that’s really what I was interested in.”

At Indian River Medical Center, he had his own AIDS unit and was treating up to 400 patients. The 12 beds were always full, with patients on ventilators and two or three dying every week. He remembers this time as simply “terrible.”

About 10 years ago, his practice at the AIDS Research and Treatment Center expanded to include treatment of facial wasting — a side effect of some medications that leaves the patient with a gaunt, hollowed-out look in the cheeks. For those in the gay community, it can be a sure sign of someone’s HIV status.

However, Pierone was having a hard time finding doctors who would treat his patients. Most of them were low income, and there was still the stigma of AIDS — “They didn’t want my skinny guys in their pretty beach offices,” Pierone said.

However, he finally found Dr. Peter Engelhart in Miami, a former HIV physician who retired from medicine but went to France to learn the art of facial fillers and sculpting. He was willing to treat Pierone’s patients and even taught him how to do it himself, eventually participating in studies with the Food and Drug Administration.

At Engelhart’s office, each doctor worked on one side of the patient’s face. When they were finished, Engelhart told the patient that he would look very different than he was used to, and it was all right to be emotional about it.

“The patient looks in the mirror and broke into tears and I was like, wow, this is not just a little cosmetic issue,” Pierone said of the experience. “This really affects people to their core of who they are, how they’re treated in the real world. There’s definitely a lipoatrophy face for gay guys. If they have a face like that, it’s almost like a red letter, people know they have HIV.”

Within the last few years, the treatment center transitioned into the Whole Family Health Center. Today, his practice cares for about 1,000 HIV/AIDS patients from Vero Beach to Fort Pierce. With the winding down of the Ryan White Act and the implementation of Obamacare, they’re able to serve more underinsured and uninsured patients this way. Also, with word getting around about his work with facial sculpting, he opened another practice, Facial Rejuvenation FL, for more mainstream facial work.

“HIV is much more of a manageable, chronic disease and that does breed a little bit of complacency because it used to be an automatic death sentence,” the doctor says when he thinks back to the epidemic of decades before. “We haven’t reached the tipping point of the epidemic, but we’re getting pretty close.”