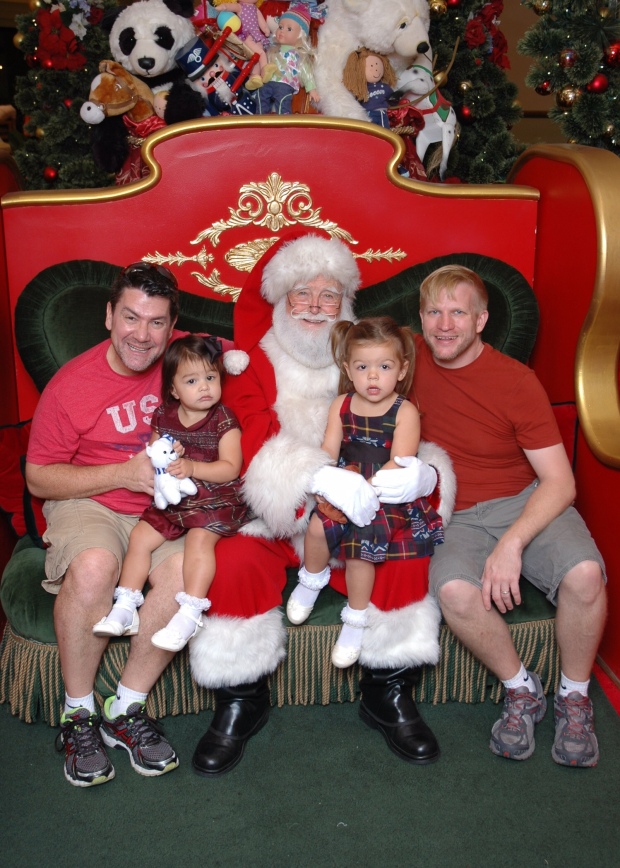 Photo courtesy of the Allen-McDaniel family

Stepping inside the Allen-McDaniel household, it’s very clear that two little girls reside inside. The sounds of the animated film “Rio” plays from the television, a “Frozen” table is the perfect size for little ones, and a pink kitchen playset is surrounded by dolls and toys. Laying on the floor as they wind down after dinner are Sarah, 3, and Maddie, 2, staring up at the adventures of exotic birds.

“Sarah asked me just the other day for the first time, ‘Why do I have two daddies?’ And I said, ‘Because God knew that you were supposed to be with us,’” said Jim Allen-McDaniel.

Jim and his husband, Chris, adopted the girls after fostering both of them, and are part of a growing number of gay couples in Florida who are adopting. Thanks to the ban on gay marriage being lifted in January, there may be more.

In 1977, it was made illegal for gay people to adopt in the state of Florida. After much fighting, a judge in November 2008 overruled the ban and in 2010 it was declared unconstitutional by an appeals court. However, the rule is still on the books, even if it is not enforced. The Florida House of Representatives is now working to completely remove it from state law.

​“All people who want to adopt should be judged the same way, with the best interests of children foremost,” said Florida Rep. David Richardson (D-Miami Beach) to Equality Florida. “My amendment ensures that all suitable adoptive parents are able to offer loving homes and the support of a permanent family.”

Jim, a senior credit manager at TravelZoo, met Chris, a former senior buyer for Watson Pharmaceuticals, at a gym in Wilton Manors 13 years ago. After a decade together, Jim was wanting to expand the family to include children, especially after a long-time gay friend was able to successfully foster and adopt.

For parents, gay or straight, who are looking to foster, they must go through MAPP (Model Approach to Partnerships in Parenting) training, a background check, and a home study. The Allen-McDaniels were concerned that they might be discriminated against because they are gay, but some of their guard was let down at the first day of parenting classes at Kids in Distress. There, the coordinator told the class that they do place children with gay couples, who often are wonderful parents — and if anyone had a problem with it, they might want to consider going to another agency.

ChildNet is a private agency that runs the foster and adoption system in Broward and Palm Beach Counties, working with the sheriff’s department and the Department of Children and Families. The idea to go private was a dying wish of former Florida Gov. Lawton Chiles, who asked his successor Jeb Bush to fix the system in 1998. Benitez, who is gay himself and chosen as one of SFGN’s Out 50 in 2014, has been involved with ChildNet since its inception. The group won a bid with the state in 2003 and Palm Beach was added to its contract in 2012.

The agency has long had a relationship with SunServe and participates in pride parades and events.

Currently, there are roughly 750 children in Florida who are looking for forever homes, according to the DCF press office. In Broward and Palm Beach County, there are 240 children up for adoption ranging from newborn to 18 years old. Most of the time, they are taken from their homes because of drug abuse, mental illness, and domestic violence, Benitez said.

Sitting on Benitez’s desk is a black-and-white photograph of his father in 1924 in a Cuban orphanage. While he describes his father’s experience with the system as an “Oliver Twist type,” his maternal grandmother had a very different experience, being adopted into a loving home in 1899 in Spain.

“I was brought up by these two forces and these two factors that taught me that children by no fault of their own can easily find themselves in predicaments that can be terrible,” Benitez said.

That was the case of a 7-month-old baby girl, Sarah, who was paired with the Allen-McDaniel family in 2012. At their home, the couple has a photo of Chris holding the chubby baby staring into the camera. She had been in another foster home, where the parents didn’t help her learn how to crawl, roll over, and hold up her head — milestones she should have reached by that age. Prior to that she also had a rough home life.

“There was a glint in [her eyes]. A glint of mischief and intelligence that was beyond her 7 months. I noticed that and I thought she was beautiful,” Jim said.

Until she was 18 months old, the couple cared for and loved little Sarah and almost lost her when her mother changed her mind and wanted her back. After much back and forth, the little girl was able to stay with the men who had been raising her for over a year. Then, she was legally adopted by Jim as a single-parent adoption in April 2014, a route many gay couples had to take.

“It definitely would not have been good for her to be moved again, because she had already been through enough. She was acting out a lot and it took her a while to bond with us. It took her a little longer,” Jim said.

During the time they thought they would lose Sarah, the couple was encouraged to take another child. They turned down multiple requests, until finally one day in February 2013 Chris received a text that there was a 4-day-old baby girl who needed a home. This time it felt different, he said, and he called Jim, who also said this time it felt different.

“I said ‘Good, because I’m getting ready to drive over there,’” Chris laughed.

“And thank God you did,” Jim said.

Her name was Maddie, and while she turned out to be an easy baby — Chris says she slept through the night from the beginning and rarely cried — there were scares with her as well. The couple almost lost her when a distance aunt and uncle of hers in Texas drove to Florida for a visit, then planned to take her back home with them. They didn’t even have a car seat. The couple was learning that with the goal of reunification in mind, many times it wasn’t what was best for the child.

Chris called their lawyer and guardian ad litem, who were able to vouch that it was better for her to stay in a stable home that she knew all her life.

At this time, state after state was legalizing gay marriage, and laws were constantly changing regarding marriage and adoption. Trying to look ahead, the couple’s lawyer and a judge they were working with recommended that the two get married in New York to help the adoption process along.

Finally, in September 2014, Jim, Chris, Sarah, and Maddie went to the courthouse to become a family in the eyes of the law. Jim legally adopted Maddie, then was able to give consent to the courts to allow Chris to adopt both Sarah and Maddie. In a matter of 15 minutes, all the stress and anxiety of fostering and the adoption process was over.

“It was just such a relief,” Chris remembered.

And months later, the family takes everything one day at a time, the way Jim said they would do it when they were still toying with the idea of even having children. Sarah is energetic, walks on her tip toes, likes both Elsa and Anna from “Frozen,” and is very curious and outspoken. Maddie is a sweetheart with a chubby grin on her face and is very proud of her little stuffed mouse from “Cinderella,” Gus Gus. Sometimes the girls fight over sitting on daddy’s lap or steal a spoon from each other’s bowls, then they sit together on their pillows on the ground to play.

“They’re constantly changing me. It’s still sinking in that I get to be your daddy,” Jim said, locking eyes with Maddie.

Looking at a family photo they took together on Santa’s lap during Christmas, the girls giggle when they tell you who is who.

This is Daddy Jim.

This is Daddy Chris.

This is the Allen-McDaniel family.