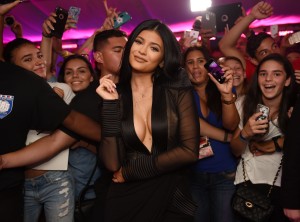 The grand opening celebration of the Sugar Factory in Miami Beach went off with a sweet start, including an appearance by reality star, Kylie Jenner.

Local fans of the Kardashian/Jenner family flooded the store on Ocean Drive for the arrival of Kylie, 17, the youngest of the brood.

Mostly comprised of teenagers, the crowd gathered outside of the store until her arrival around 8:30 p.m. Wearing a revealing black dress (she joked on Instagram that she was wearing a lot of duct tape underneath), the teen went to the upstairs deck of the Hotel Victor, where the store is located, for photos and meeting with the press. All the while,  DJ Irie was on the turntables.

Later, she went downstairs to the candy store, where another throng of fans waited for her.

The Miami Beach location is Sugar Factory’s sixth store, with other locations in Brooklyn, Chicago, Las Vegas, and even in Bahrain. Located inside the Victor Hotel, the store includes a gelato bar, novelty candies, gift boxes, and celebrity-endorsed, blinged out “couture lollipops.” Kylie and her older sister, Kendall, have their own “diamond” lollipop, as well as Britney Spears, Nicole Scherzinger of the Pussycat Dolls, Mel B of the Spice Girls, and Rihanna.

Besides the sugar rush, guests can sit inside the store, browsing through a full restaurant menu, featuring burgers, steaks, salads, salmon, and other dishes.