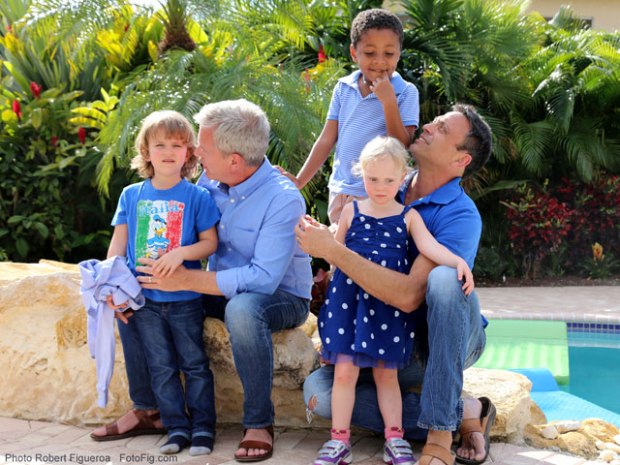 Ferd van Gameren, left, and his husband, Brian Rosenberg, with their son Levi, 6, and twin daughters, Ella and Sadie, 5. The couple founded Gays With Kids in 2014. (Robert Figueroa)

In 2009, Bryan Rosenberg and his husband Ferd van Gameren had just found out they were going to be parents – a 3-day-old baby boy was available for adoption – so they needed to get their house ready right away.

The couple took off from store to store with a doula to help them pick out what they would need for a newborn — bottles, bibs, bouncers and all — when they noticed that everything was geared towards moms.

“I swear half the labels on the products that we ended up buying said ‘Made for mommies!’ ‘Approved by mommies!’” Rosenberg laughed. “Are we not supposed to buy this stuff?”

After they brought their son, Levi, home, Rosenberg researched online, looking for a community of fathers, gay or straight, that they could reach out to.

Just before adopting Levi, they had signed a nonrefundable surrogacy agreement. A few months later, their surrogate became pregnant with twin girls. In 17 short months, the couple had become parents to three children. With still no community available for gay fathers, Rosenberg and van Garenem decided to create one, and Gays With Kids was born in June 2014.

“I wanted to tell stories about raising children and I wanted to find a place where we could address issues that are important specially to me as a gay dad,” Rosenberg said. “It has greatly exceeded our wildest expectations.”

With a website, active social media, and a YouTube account, Gays With Kids gives dads around the country — and the world — a place to learn about adoption, surrogacy, marriage, day-to-day child rearing, legal issues, and also videos of gay couples with their children sharing their stories.

Plus, the couples featured are from all over, interracial, binational, previously in heterosexual relationships, or transgender, providing a look at how diverse gay parenthood can be.

“What there’s a significant lacking of is accurate and honest portrayals of our families, which as it turns is no different from other families,” Rosenberg said. “We spend our weekends chasing our kids to soccer, going to different parties, we struggle with getting them to do homework — it’s exactly the same issues.”

Gays With Kids has just launched their IndieGoGo fundraising campaign, check it out here.

David Novak was playing with his son, Ashton, flipping him upside down, eliciting squeals and giggles from the happy 2-year-old. A woman looked on, doting, and asked “Your wife lets you do that?”

Novak looked at her and replied, “No, but my husband does.”

Gays With Kids has featured the lives of gay dads from different walks of life, including Novak and his fiancé, Alex Costa, and their rambunctious toddler. The two were in heterosexual marriages, both ending, when they met at the gym. Costa, originally from Recife, Brazil was drawn to the Plant City man’s outgoing personality and positivity, and the two dated when they were both officially separated.

The following year, they attended a Pride festival and learned about fostering through Kids in Distress in Wilton Manors. Both men knew they wanted to have children one day and went through the process to become foster parents.

They got a call that a 3-month-old boy needed a foster placement and the couple gladly brought Ashton home.

“The first nine months I’d wake up every morning to myself and say, ‘This is not my child, I’m doing this to give him a good start in life.’ I had to keep reminding myself of that. You build up this little wall,” Novak remembers. “When he turned a year old and he started getting his personality, that little bit of that wall just crumbled. It was an incredible thing but then I knew if we weren’t able to keep him I would have been devastated.”

When Ashton was 17 months old, Costa and Novak were able to adopt him and they are both listed as his parents on his birth certificate.

“He’s definitely changed our lives,” Costa said. “We went to Brazil with him and the fact that we had no problem traveling with him internationally, you know two guys and one kid.. [there’s] so much positive energy around us.”

Jamie the guinea pig is upset her Uncle Bobby, her favorite uncle, is getting married — everyone in the family seems excited, except for her! However, she learns that she’s not losing her uncle, but gaining a new one. (Pre-K to Grade 2)

“And Tango Makes Three” by Justin Richardson and Peter Parnell

Penguins Roy and Silo call the Central Park Zoo their home and place a rock in their nest to try and hatch it. Seeing this, the zookeeper gives them a real egg that needs care. The penguins take turns sitting on it until it hatches, and little Tango is born. (Grades 1 to 3)

“A Tale of Two Daddies” by Vanita Oelschlager

A young girl on the playground answers her friends questions about having two daddies — and who she goes to when she’s sad and need some love. Both, of course! (Pre-K to Grade 1)

“The Purim Superhero” by Elisabeth Kushner

Nate loves aliens and he really wants to wear an alien costume for Purim, but his friends are all dressing as superheroes and he wants to fit in. With the help of his two dads, he makes a surprising decision. (Pre-K to Grade 2)