Jessica and Mandy Gerow during a maternity photo shoot. Photo by Stephanie Sonju.

It was two years ago that Kara Matus stepped into the NICU to visit her tiny twin daughters, little miracles named Reese and Cameron. The nurses asked her, “Where’s dad?”

Matus’s wife, Jaclyn, gave birth to their daughters thanks to the growing field of reproductive medicine, and many other lesbian couples like them are able to have children together — and in a variety of ways (check out our infographic).

“There continues to be so many advancements that I noticed definitely there’s been an increase year after year in the LGBT patients that we’re getting,” said Dr. Lesley de la Torre, who practices at Associates in Advanced Maternal Fetal Medicine in Miami.

Coming from a long line of obstetricians, de la Torre found she excelled when working with at-risk patients. Today, she consults with doctors to make sure families are using the best procedures and plans to have a child. She highly encourages couples to have in-depth meetings with their doctor to discuss a plan of action and to educate themselves.

Dr. Carolina Sueldo, who specializes in reproductive endocrinology and infertility at IVF Florida in Margate, agrees. At her practice, she sees the gamut when it comes to her patient population. In the initial meetings, doctors discuss reproductive plans — who’s going to be pregnant? Whose eggs will be used? How involved does each person want to be? In her experience, most lesbian couples who come in have already done a lot of research and have a good idea of what they want.

If it’s determined that both partners are on equal grounds physically, it’s a very personal decision to decide who will carry or donate their eggs. However, other factors come into play, she said — each partner’s age is vital, as well as their place in life with work, income, health insurance, maternity leave, and more.

Before attempting to get pregnant, doctors run tests to make sure there are no issues before they begin the process. This includes STD testing, blood testing, and a vaccine workup, among other things.

“l hate to find out three or six [months] or longer that there was an issue that could have been prevented or that was possibly preventing pregnancy this whole time,” Sueldo said about the testing.

When the Matuses were starting their family, they had no friends who had gone through the process and could only rely on their own research. They also interviewed doctors to find the right one who felt comfortable with a same-sex couple. Like many couples, they tried intrauterine insemination (IUI) first. When that was not working, they moved onto in vitro fertilization (IVF), using both of their eggs so they could both be a part of the mix, a process called reciprocal IVF.

When it comes to fertility issues, Florida can improve. Resolve, also known as the National Infertility Association, gave the Sunshine State a C grade on its nationwide fertility scorecard. The score is based on a number of criteria, including the state’s insurance mandate and the number of doctors specializing in infertility issues. Florida does not require insurance companies to cover procedures that aid with infertility, so many companies opt not to. This leaves patients with a hefty bill when they’re looking to expand their family. On the other hand, Connecticut mandates insurance companies cover three rounds of IUI and two rounds of IVF.

Also, lesbian couples go to a fertility clinic not because they have fertility issues, but rather, a lack of a sperm source. Because they are not considered to be patients with fertility issues — although there can be complications to receive that diagnosis — insurance will not cover pre-pregnancy testing. This would be the same as a single, straight woman who wants to have a child without a partner.

For healthy same-sex couples with no fertility issues, “they’re going to have a lot of trouble finding coverage,” she added. The doctor estimates that with medication, having a child through IVF can cost easily up to $25,000.

Another cost is a visit to a psychologist. Patients who use donor sperm or eggs, straight or gay, are required by most practices to see a psychologist to ensure the couple is on the same page regarding starting a family.

Finally, there are legal issues at hand when using donor sperm. When sperm comes from a cryobank, donors sign away their legal rights to any children. Couples have to decide whether to use an anonymous or known donor through the cryobank — more couples lean toward the latter option. This means that once the child turns 18, they can reach out to the cryobank for their biological father’s contact information.

Mandy and Jessica Gerow opted to use a known donor for an at-home insemination. Before their daughter, Ellianna, was born, the donor went through a battery of tests and signed away his legal rights to the child. Although both women are listed on the birth certificate, for an extra layer of protection, Mandy’s wife will be legally adopting Ellianna as well.

“We want to make sure there aren’t any issues later on,” she said. “She’s our daughter.”

The Matuses also came across the legal side of having children. When they had their eldest daughter, Eillek, five years ago, same-sex marriage was still not legal in Florida. By the time the twins came around, they were able to get Eillek’s birth certificate reissued with both women listed as parents. Both women are also legally recognized as the girls’ parents through step-parent adoption.

“I never thought that this would be possible, that I could marry Jaclyn or I could be on the birth certificate,” Matus said. 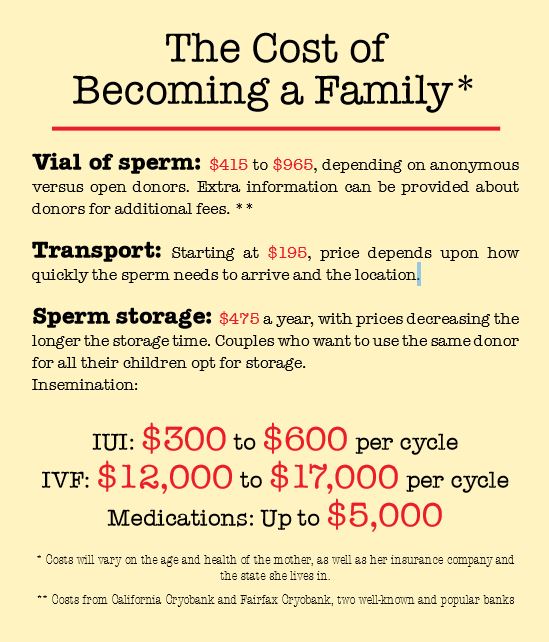 When Mandy and Jessica Gerow were ready to have a family, after nine years together, they were shocked by the cost of IVF. Instead, they opted to try at-home insemination using frozen sperm from a cryobank close to their home in Orlando.

The timing had to be perfect — frozen sperm can only live up to 24 hours, and a woman’s ovulation usually lasts only up to 48 hours. After 11 unsuccessful attempts, varying the time period they would inseminate, the couple was emotionally drained. They decided to take a break.

“I felt like a failure,” Mandy said. “[I thought,] ‘Is something is wrong with me? Why is it not taking? Did we do something wrong?’”

One of Mandy’s colleagues was determined to find a sperm donor — when the sperm is not frozen, it can survive for up to five days — and her persistence paid off. A man who transferred to their office was interested, so he took blood tests, was tested for STDs, and even provided his baby pictures to the Gerows. Three weeks later, when Mandy was ovulating, he brought over his sperm in sterile cups in a brown bag. Mandy wore her menstrual cup with the semen for 12 hours, twice in one cycle.

“It almost felt like Jess got me pregnant,” Mandy said of her wife of two years. “We weren’t in a sterile, white room, there wasn’t a doctor with gloves on, it was me and her in our own moment. It was really special.”

As soon as possible, she took a home pregnancy test and saw a faint second line — she was pregnant on the first try. She placed the test stick on a hamburger bun and put it in the oven to surprise Jessica that there was literally a bun in the oven. Nine months later, Jessica helped deliver their daughter, Ellianna.

“Her eyes were wide open and she was staring around and it was so magical to see this life we were waiting for,” Mandy remembers. “We couldn’t believe she was actually here. She was perfect.”

After seven years together — two as wives — Jaclyn and Kara Matus are the proud parents of three little girls: Eillek, five, and twins Reese and Cameron, three. Both women always saw themselves as mothers one day, but Jaclyn was more interested in the pregnancy experience, Kara said. So, the couple did what is growing more popular with lesbian couples — reciprocal IVF.

“On one hand, I just wanted to be a mom and I don’t care where I get a child from,” Kara said about the couple’s choice. “And on the other hand, you’re like, ‘I don’t want to wake up one day and not have a biological child.’”

“I don’t care who she ‘belongs’ to. But you don’t know that when you’re doing the process. You’re fearful of the unknown.”

The couple first tried IUI, but when that was not successful, they decided to do IVF. In the first pregnancy, two embryos were implanted and one took, resulting in the birth of Eillek. The second time, both embryos took and the couple had twins.

Kara called the process “scary, especially when you get a box delivered with $5,000 worth of needles and patches and pills, it’s like, ‘This is how I’m going to start a family?’”

“It’s a hard process but it’s what felt comfortable and right for our family,” Kara said. “Everyone has their own journey.”

Dr. Lesley de la Torre works with families that need extra help having children every day, but nothing could have prepared her for going through the same experience with her wife, Massiel. Together since 2006, the couple decided to try IUI to have their child. When multiple rounds didn’t work, they moved on to IVF. On the first round, Massiel was pregnant.

In fact, when Lesley first got word that her wife was pregnant, she cried tears of happiness — then the doctor in her demanded to see the proof and she laughed.

During the delivery, Lesley’s medical partner and she worked to deliver the baby, and she joked she “took the glory” with being the first to hold their daughter, Miranda, now six months old.

“She’s intuitive. She’s really attentive. She was born like that. Her eyes wide open. I’ve never seen anything like it,” she remembers. “I’ve obviously brought many kids into this world — and not just because she’s mine, but I’m telling you, the moment she was born she didn’t blink forever. She just kept her eyes open and that’s not typical. She’s been recording every step from minute one.”

As both a doctor and a mother in a same-sex family, Lesley’s advice to others is to take the decision to start a family seriously. With the process to have a family thankfully being easier for LGBT couples more than ever, she encourages couples to have long, hard discussions about where they see their future.

“I don’t want them to take it for granted,” she said.