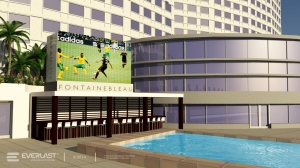 Every four years, the world goes insane with futbol fever. Whether you’re cheering on Italy, Argentina, Germany, host team Brazil or the good ol’ USA, here’s your go-to guide for all things World Cup to celebrate every “gooooooooaal” in style.

If traveling around the world to visit all the World Cup countries isn’t in your summer plans, head to the Brickell area of Miami and eat your way through the globe with $5 food specials. Italy’s homemade pasta will change up from day to day, and then there are bacalao croquettes from Spain, Brazil’s famous feijoada, all-American burgers, mussel and frites from France, German sausages and more. Plus, with $20 bottomless beers, you can’t go wrong!

Sure, every bar in town is going to be playing the matches, but at the Fontainebleau you can watch the game in style. Reserve a cabana, available in three different packages, aptly named the São Paulo, Brasilia and Rio, featuring Leblon Caipirinha, food platters, swag bags, a bottle of Grey Goose and buckets of beer (depending on which one you go for). Each cabana is outfitted with a flat-screen TV to cheer on your team, as well as butler service, wireless Internet and a mini fridge. If you’d rather root from the pool, there’s going to be a huge screen playing the games.

Hard-core soccer fans who want to do more than watch can head over to the Hard Rock to test their knowledge of the game. The Kick-It! Soccer Challenge runs from June 11 to July 14 and invites fans to challenge friends, family and fellow diehards to predict which teams will win each match. At the end of the World Cup, the person with the most correct picks will win $30,000. That’s a good chunk of change!

Looking for something other than a jersey? Miami brand Peace Love World has created its own line of unisex World Cup T-shirts which can be found here. The country’s colors and name are on the white, crew-neck shirts with the signature “I am” motto on the front.
Peace Love World, 225 Miracle Mile, Coral Gables, 305.444.5120