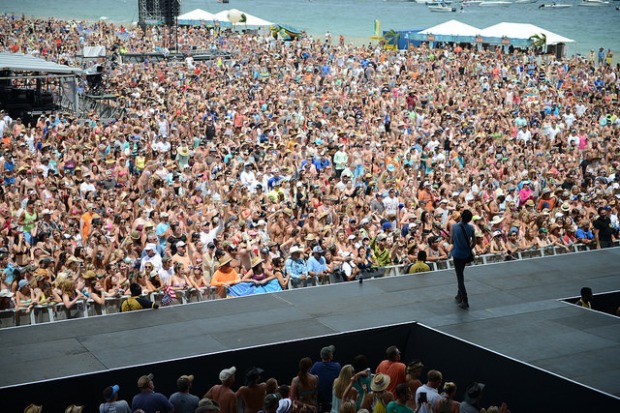 What’s your musical style—spurs and cowboy hats, head-banging, a smooth sax, or getting lost in electric tunes? Is it new underground artists that pique your interest, or major acts touring the nation? Whatever gets your body moving and your toes tapping, South Florida’s endless springtime music festivals—big and small—keeps music lovers of all kinds happy.

Considered the largest block party to celebrate Hispanic cultures from around the world, the Calle Ocho festival (March 13) on Miami’s legendary SW 8th Street, spans 19-city blocks in Miami’s Little Havana. Get your dancing shoes on to vibrate with the hip-shaking rhythms of Latin music from salsa, reggaeton, merengue to hip-hop, including street dancers and eight dedicated stages of performances.

Jazz in the Gardens

The blues, jazz and R&B genre culminate annually with Jazz in the Gardens (March 18-20), an unforgettable music and soul food experience at Sun Life Stadium in Miami Gardens, home of the Miami Dolphins.  Every year this event gets bigger and better, drawing locals and out-of-towners to one of the most highly regarded and anticipated events in the country.

Grammy award-winning artists such as Charlie Wilson, New Edition, Neyo, Earth Wind & Fire and Najee have performed in the past. This year, the “Queen of Soul” Aretha Franklin and R&B phenom Usher will headline the festival along with Kool and the Gang, Average White Band, Kenneth “Babyface” Edmonds, Brian Culbertson and more. Comedian and radio DJ Ricky Smiley plays host to the fest.

Miami might be known as the capital of electronic dance music, thanks to hosting Ultra Music Festival (March 18-20) every year in Bayfront Park—a part of the larger Miami Music Week. The world’s best DJs take over the stages to a sea of glow sticks, laser lights and impressive displays.

Every spring, thousands of people descend upon the sands of Fort Lauderdale beach for the Rock the Ocean’s Tortuga Music Festival (April 15-17). Last year’s sold-out musical extravaganza drew a record-breaking attendance of more than 75,000 music fans from around the world. The three-day event combines music from the hottest artists in rock, country and roots, and a mission to ocean research and conservation.

SunFest (April 27-May 1) is Florida’s largest waterfront music and art festival. It has taken place the first week in May since 1982, attracting more than 175,000 revelers annually. Musicians and artists gather along the Intracoastal Waterway in downtown West Palm Beach, to perform live music and participate in the festival’s juried arts and craft show.

Mix and mingle with performers, artisans and food vendors from around the country but also from the local community. Past artists have included 1980s idol Eddie Money, alternative rock bands The Pixies and Third Eye Blind in addition to pop artists like Robin Thicke and Pitbull.

If you’re staying nearby, take a bike to SunFest. The festival and the Downtown Development Authority have partnered to offer free valet bike parking like a coat check. Find it on North Clematis Street at Centennial Square. 100 Clematis St., West Palm Beach.

There’s a lot of buzz about the newest kid on the block in the music circuit—the Okeechobee Music & Arts Festival (March 4-6)—happening about an hour north of Palm Beach County at Sunshine Grove in Okeechobee, Florida.

Dubbed as more than a music festival, the experience is a modern-day Woodstock meets Coachella. Conceptualized by one of the organizers of the world famous Bonnaroo, the fest will offer activities 24-hours a day, including talks, workshops, art, yoga and nonprofit tents besides the 80+ musical acts in five stages.

The campground will feature a bevy of activities including a ferris wheel which will anchor the Aquachobee “beach” area where festivalgoers can swim and drink. Dance the night away to DJ music at Jungle 51. On the main stage an eclectic mashup of music artists form part of the three-day lineup including Mumford and Sons, Daryl Hall and John Oates, Robert Plant and the Sensational Space Shifters.

Originally published in Where Traveler.